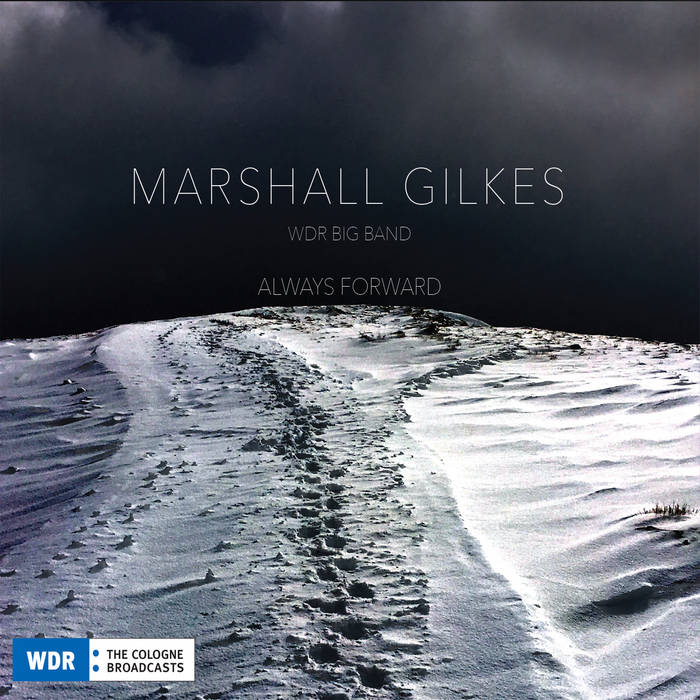 heinz1959 Marshall Gilkes is one of the greatest trombonistst. Simply like his music. Also, I’m from Cologne, Germany. As ist the WDR Big Band. Sincere sympathies.

Ben Koehler This is one of my favorite big band jazz albums, hands down. The original compositions are exquisite, and the playing matches to suit! Favorite track: Switchback.

All Selections composed and arranged by Marshall Gilkes ASCAP with the
exception of Easy to Love composed by Cole Porter and Portrait of Jennie by Gordon Burdge & J. Russell Robinson


Marshall Gilkes
Always Forward
As the title of his second collaboration with the WDR Big Band implies, forward-think- ing trombonist-composer-arranger Marshall Gilkes is committed to pushing ahead with his mu- sic. “I believe strongly in the tradition,” says the Beacon, New York resident, a member of the Maria Schneider Orchestra and a frequent guest artist-conductor around the world as well as a key player in Columbian harpist Edmar Castañeda’s trio. “But then I also believe we should push the music forward. I’ve never been a huge fan of those purists that think jazz stopped after 1960.”
Following the success of 2015’s acclaimed Köln, his Grammy nominated collaboration with the WDR Big Band, Gilkes has come up with another adventurous bit of modernism that showcases his vivid ensemble writing and peerless chops in Always Forward. A former member of Germany’s premiere large ensemble (from January 2010 to December 2013), Gilkes has joined the impressive roster of artists who have documented collaborations with the esteemed big band, including saxophonists Joe Lovano, Bill Evans and Maceo Parker, guitarists Hiram Bull- ock and Bireli Lagrene, pianist Abdullah Ibrahim, bassist Ron Carter, keyboardist-composer Joe Zawinul, drummer Bernard Purdie, the New York Voices, Steps Ahead and the Brecker Broth- ers. The resident jazz branch of the Westdeutscher Rundfunk radio and television station, the se- cond largest public broadcasting organization in Europe after the BBC, the WDR Big Band is easily the swinging-est band in the Fatherland, boasting a crew of world class players and impro- visers in alto saxophonists Karolina Strassmayer and Johan Hörlén, tenor saxophonist Paul Hel- ler, trumpeter Andy Haderer, trombonist Andy Hunter, guitarist Paul Shigihara, bassist John Goldsby and drummer Hans Dekker.
“I originally knew about the WDR Big Band from a record my brother introduced me to called East Coast Blow Out (1989) that Jim McNeely wrote and which featured John Scofield with Marc Johnson and Adam Nussbaum,” says Gilkes. “I was in high school when I first heard that and it made a big impression on me.”
Fast-forward 15 years: the trombonist is invited to audition for the Cologne-based large ensemble. “They flew me over to Germany to play with the band for two weeks on a project with Patti Austin,” he recalls. “Then a year later they had me come back again for three weeks to play on a record for Mike Stern that also featured Dave Weckl and Tom Kennedy and was written by Michael Abene. About a month or so after that they offered me the position. I heard that they tried out maybe 30 guys for that spot before they hired me.”
Gilkes’ second recording as a leader with the marvelous WDR Big Band proved to be as hugely rewarding as his first. “Standing in front of a band like that and writing for it...that’s a whole other drug,” he says. “It’s one thing to play as a soloist and a member, but when you get to write and stand out front and hear all that hard work come back, it’s a pretty addictive thing.”
And while his writing on Always Forward reflects a distinct penchant for swinging, as on the exhilarating opener “Puddle Jumping” and his reimagining of Cole Porter’s “Easy to Love,” it also reveals his classical pedigree. “A lot of my sound comes from listening to classical players and working on classical stuff,” explains Gilkes, who is also currently a member of the classical trombone ensemble The Slide Monsters, led by Eijiro Nakagawa and including Dutch bass trom- bonist Brandt Attema and Gilkes’ Juilliard School mentor, Joe Alessi, principal trombonist for the New York Philharmonic. “And it’s definitely something you have to keep up.”

We hear Gilkes’ beautifully warm tone and impeccable articulation from the outset as they launch into “Puddle Jumping,” a thrilling, clave-fueled big band chart that jumps back and forth from 7/4 to 4/4 while showcasing the trombonist’s remarkable facility and astonishing in- tervallic leaping on his instrument. Interestingly, that technique is not something he picked up from listening to Carl Fontana, Frank Rosolino, J.J. Johnson or any of the other jazz trombone masters who came before him. Instead, it was tenor sax great Michael Brecker. “It all comes from his tune ‘Delta City Blues’ (from 1998’s Two Blocks From The Edge),” he explains. “When I was younger and working on that, I didn’t really know it wasn’t a typical thing to do on the trombone. So in a way that maybe helped. But I just worked on it systematically, trying to mimic Michael Brecker by using a pedal tone and trying to create grooves on top of it. Even now when I play a cadenza I’ll try to create a sense for the audience that I’m the rhythm section as well as the soloist. You try to create a bass line so that the audience hears the groove, and then you put the melody over the top and you go back and forth, keeping that idea going.”
Gilkes opens “Easy to Love” with some radical reharmonization and tight unisons on the melody line by the brass. Johan Hörlén also offers a crackling alto sax solo here. “I’m a big Bob Brookmeyer fan so some parts of this tune, I would think, were probably heavily influenced by him,” he says. “I love people who take a new approach to standards, which is where this version comes from. I used to practice that tune in different keys a lot, just on trombone. But then when I sat down at the piano I started thinking, ‘Where else can I take this?’”
“Morning Smiles,” a mellow number Gilkes wrote for his infant son Ethan, opens with a lovely melody played with uncommon lyricism by the composer. The gentle piece unfolds grace- fully, ultimately swelling to a rhapsodic crescendo with Gilkes unleashing his prodigious chops over the top. “When you’re a parent with a young baby, you experience sleepless nights,” says the composer, reflecting on the song title. “Then in the morning you go in to check on him and your child smiles at you in a certain way that makes you forget about the lack of sleep.”
Shifting gears, Gilkes and this crew next deliver a swaggering bit of big band funk on the exhilarating “Switchback,” which features two scintillating sax solos by Strassmayer and Heller and culminates with Dekker’s flurry on the kit over a band ostinato. The classical influence comes out on “Lost Words,” which is a greatly expanded take on the tune that Gilkes originally wrote as the title track of his 2008 album. “This is a very different version,” he explains. “Rather than having the piano play the introduction, I wrote an introduction for brass and woodwinds. The statement of the melody is similar to the original record, but being that it’s a big band there’s obviously more to work with, so there’s more counterpoint and different things going on throughout the chart.” Pianist Simon Seidl plays angular lines on top of a series of stop-time hits in the horns. And underneath it all is a kinetic drum ’n’ bass feel supplied by Dekker. “When I first wrote that chart years ago I was visiting my brother, who was really into electronic mu- sic...stuff like Squarepusher. That was where the influence came from for the feel in that particu- lar section of the piece.”
His three-movement, 14-minute “Denali Suite” is an evocative composition that features Hörlén on soprano sax on the uplifting first movement, pianist Seidl on the hymn-like second part and trombonist Andy Hunter on the swinging third movement. “I wrote that piece after last summer when my wife, son and I went up to Alaska for a friend’s wedding and we kind of made a vacation out of it. We drove all over the place and ended up in Denali National Park, which was pretty unbelievable and inspiring. That melody in the middle section is something I came up with while I was up there. So I sang this melody into my phone and when I got home I started

messing around with it. I started the suite in the second section and then worked my way back- wards, eventually getting three things that moved together nicely.”
Gilkes’ remake of “Portrait of Jennie,” a standard recorded by Freddie Hubbard, Clifford Brown, Wes Montgomery, Nat King Cole and J.J. Johnson, is a chart he wrote a few years ago. “I took the first few notes of the melody, which the horn introduction and interlude is based off of. And I just tried to take that and develop it through the woodwinds in the beginning and then the trombones later on. I love Aaron Copland, who uses a lot of that kind of poly-harmonic vo- cabulary.” Lead trumpeter Andy Haderer plays some lovely flugelhorn on this lush number.
The album closes on a triumphant note with the rallying cry “Always Forward,” which Gilkes says bears a bit of Maria Schneider’s stamp in the rhythmic feel of the introduction. He adds that the title is more than just a musical reference. “The whole tune is supposed to be about life,” he says. “It’s about the political situation that we’re all in now, the way that so many things are changing so fast with social media and with so many other things in society. It’s tricky nowa- days with so much going on, and sometimes it can get you down. But I’ve always had the mind- set to just push forward and just do your own thing and not worry about everything else going on. It’s the idea that no matter what hits you in life that you always have to push forward and persevere.” — Bill Milkowski
Bill Milkowski is a regular contributor to Down Beat and Jazzthing magazines. He is also the author of “JACO: The Extraordinary and Tragic Life of Jaco Pastorius” (Backbeat Books)